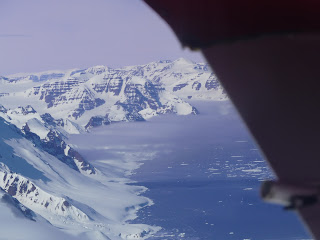 Last May I was approached by Paul Walker, who runs Tangent Expeditions.
Paul was facilitating logistical support for a film crew, who were planning a six week project in Scoresbysund.
The aim was to produce a two part Mountaineering and Kayaking documentary, highlighting the effects of climate change and its impact on the hunting community of Ittoqqortoormiit.


I had kayaked extensively in this area before, so to cut quite a long story short, I ended up on the team as kayak guide / safety adviser for the paddling section of the documentary, this meant I would be out in Ittaqqortoormiit for about 3 weeks in June.
Just enough time before returning to the UK for a week and then heading back out to Angmagssalik to lead my guided expeds in July and August.

It was all very last minute, apparently this is not uncommon with film projects, and it was a bit of a rush to procure all the kit.


The project required reliable expedition sea kayaks. I obviously recommended NDK HV Explorers, as I knew from numerous expeditions, that they would carry the kit and stand up to the abuse both a film crew and the sea ice would inflict on them. Being fibre glass we would at least be able to repair them should in the unlikely event they sustain catastrophic injury.

A couple of my pals (Nick and Alistair) collected the four Explorers and a selection of Celtic paddles from Nigel's factory in Holyhead and delivered them, along with kit from Reedchillcheater and Steve Wetman, at the docks in Immingham. From here they were shipped to Iceland and taken overland by truck to Akureyri. 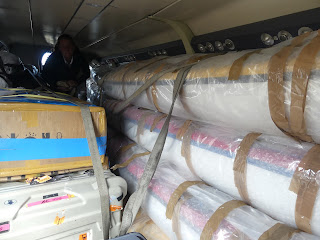 So far so good, they now had to go into a "Twin Otter" for a special flight out to Constable Point on the east coast of Greenland. I was always told to measure twice / cut once. I think on this occasion both kayaks and the plane were measured a dozen times. With the seats out and some packaging removed they just fitted, with only an inch or so to spare. 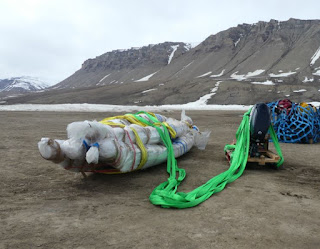 The next challenge was to get them out to the settlement slung under a helicopter. 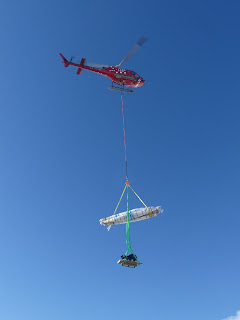 After a bit of faffing, over concerns that they would be too light and hence swing all over the place and cause issues for the pilot, they were weighted down with the expeditions Zodiac outboard - success.
This was a first for me, not sure how many Explorers have been transported to the start of an expedition as a sling load.

The next few days were spent, like on any other expedition, faffing with kit.
The film crew were using a couple of hunters boats as a floating platform and Matt, one of Pauls instructors, was also running the Tangent Zodiac. Boats, equipment and film gear all needed prepping and loading. 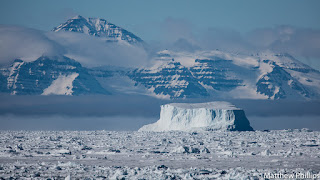 The only snag at this stage, being June, was there was no water to paddle in. To be fare it had been pretty perfect as we flew in, however the pack ice had been pushed into the fjord, blocking any chance of an early get away.

While the main team filmed in and around the community, I got the chance to accompany (as his gun man) one of the camera men who was trying to get footage of Polar Bears. We had a great sled ride out to the mouth of the fjord where the pack ice was likely to be hiding bears hunting for seal. 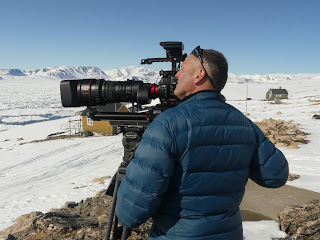 It was in this area in July 2006, that Phil Clegg, Pete Jones and I waited 9 days for the ice to clear for our crossing of Scoresbysund on our attempt to paddle 700 miles down to Angmagssalik. We had a couple of attempts at the crossing before safely getting over and while waiting had a bear walk right past our tent in the night. That particular expedition in 2006 was unsuccessful. We got half way, but after many protracted delays caused by sea ice, had to return the way we had come - None the less it was a fantastic adventure and was the start of my guided trips. 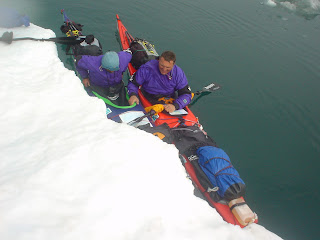 Time is money as they say - in this case literally, so in desperation to get off we launched as soon as a shore lead opened up and offered a chance of progressing. It was too thick really to make any sensible progress, however if we could make it across the little bay by the settlement we had a chance of reaching some open water before the local shore lead closed up again. The hunters both had boats with 180 hp Yamaha outboards, capable of pushing through choka ice, so we had a safety net never available on independent / unsupported expeditions. 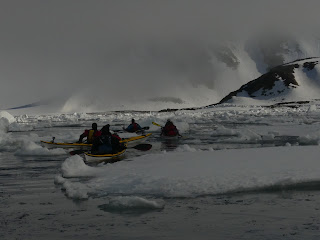 A couple of slow days paddle put us on the "James Land" coast. It is basically a shallow beach running for a 100 miles into the top end of Scoresbysund, not too inspiring but there are fantastic views across the fjord. However being shallow the ice runs aground and there is always a gap of open water by the shore. 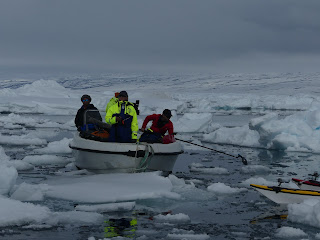 The only issue is that at high water the beach often disappears and landing by kayak and getting out on the frozen snow wall is a pain. Obviously in July and August landings in this area would be a doddle. 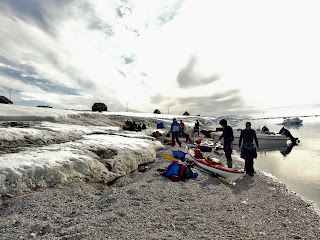 The highlight was seeing a polar Bear up close again. During our expedition in 2006 we had had numerous encounters, but then the three of us were on our own, with out any support and miles away from civilisation. Now on day three when a big healthy male bear walked into our camp there were a dozen folk, two of which were experienced local hunters, so we were able to shoo him away with out incident. There is safety in numbers for sure and this is why the expeditions I guide each summer in the Angmassalik area have a total of 8 clients plus 2 guides. A bear is less likely to cause trouble if he is outnumbered. On my trips we also do a waking watch at the campsite. Here we were doing the same, with the added agenda of filming one, rather than let it wander past. 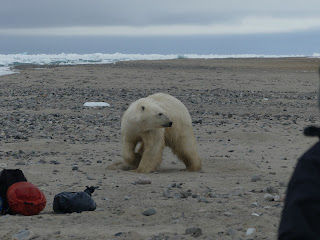 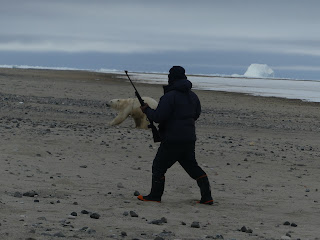 The encounter with the bear was the footage the crew obviously wanted - I am sure if we had just stood still and made no noise, it would have come very close, as it did and checked us out but then moved off on its intended route - we were just in the way. It was scared off with rocks and flares and swam out to sea unharmed. Prob his only encounter with humans and like most of the crew, their first bear. A very special moment for sure! 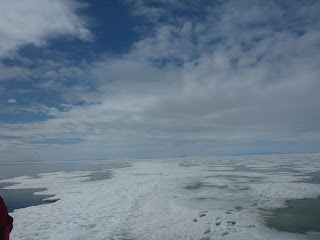 The kayak team reached the ice edge after about 60 miles of paddling. It blocked the route and prevented further progress.
There were several other production options at this stage so this was the end of the kayak phase and my involvement on the water.

The remainder of my time was spent in helicopters, travelling to film locations, looking for Muskox - I had never seen these stage beasts.
Quite amazing creatures.. 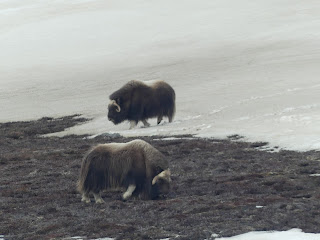 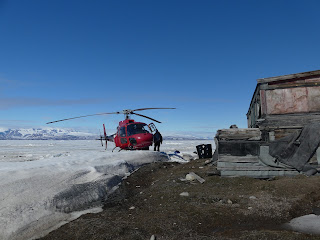 Checking out routes and laying in stores for phase two of the filming project.

I have not been at liberty to discuss this project in any detail, so this blog is rather vague.
However it was a great experience, the team were a fantastic bunch and I am sure it will be a very interesting adventure documentary, that covers the important aspects of climate change and how this impacts on the hunting community in this remote part of east Greenland.
Well worth watching - keep an eye out for it.