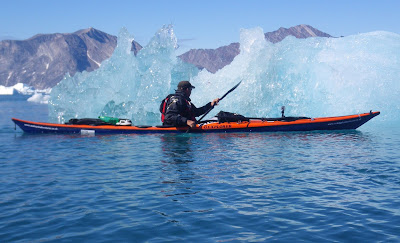 I just cant believe how well my old NDK Explorer has done over the years.
It was made way, way back in another time by Mike Webb, when the small factory was next to the "Paddlers Return", for an exercise with the Holyhead Life Boat. It wasn't expected to survive that!
I then got hold of it and after a bit of TLC used it for many years as a fleet boat.
As it was never expected to last its original mission it never had a skeg fitted (not worth the labour and extra expense), so was a challenge for some folk to use.
However in 2008 I shipped it out and added it to my growing fleet of kayaks in Tasiilaq, East Greenland. Since then it has been used every summer - as my guide boat, as without a skeg its so easy to pack and has quite a bit of extra space, and with no skeg it is less prone to damage and potential leak spots. 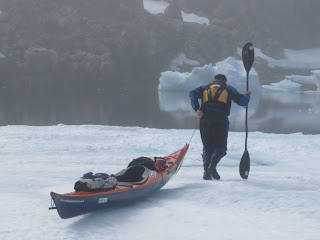 Admittedly it has undergone some repairs, but nothing too major, keel strips every few seasons keep it solid, strong and bone dry.
The hardest thing was fitting a new cockpit rim a few years ago, I had a lesson at the factory in Holyhead and was supplied the correct stuff to mix up when I got out to Greenland.
However as expected, this was a particularly unpleasant task to be doing outside my storage container in the heat, dust and mosquitoes.
Ironically, two days later this great repair job got damaged, when an new and over enthusiastic helicopter pilot at the pad in Tasiilaq managed to lift the empty kayak up and blow it over a small cliff. I fixed it, but it was a shame.
Folk say every scratch tells a story or reminds you of a memorable moment, well there are too many stickers on mine (they make great cover ups for repairs) to remember them all, that's for sure. 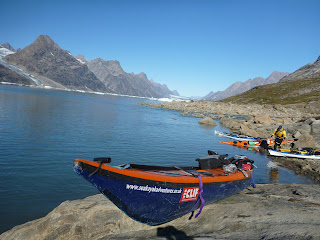 I can say though, that after an early hard life, and then a re birth to the sea ice of East Greenland, she is still going strong.
Now with well over 5500 Arctic miles under her hull she is still fit for purpose in this pretty demanding environment.
Always paddled fully loaded and always braking trail when the sea ice gets thick.
Like many old girls - she has put on a bit of weight here and there, but that's fibre glass for you.
Still a looker though, much loved and admired by many.
One things for sure - she will outlast me.

If any suitably experienced kayakers fancy a trip of a life time - then there are still a couple of seats, in less used and equally attractive kayaks, available on one of my guided expeditions this summer.