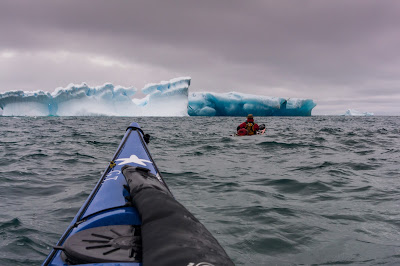 I first paddled with Martin back in 2012.
I was immediately impressed with not only his relaxed manner and obvious competence but also the quality of the kayaks he supplies.
Most tour companies that operate on the churn principle supply lesser quality plastic kayaks that "just" do the job.
Martin's are the sort of kayaks you would buy for yourself. In fact, the kayak I paddle when I am on one of his trips is the same make and model as one of my own in Tasmania,a Rockpool GT. During the trip, discussion of plans and aims is inclusive and friendly while at the same time you know there is a competent mind in the background considering all aspects of the trip from the point of view of safety, to individual paddler's abilities, the need to resupply and ultimately to providing the team with the best trip possible.
So far I have paddled in East Greenland 3 times for a total of around 900kms. Two of the trips were with Martin and one was a specific solo photographic trip, for which Martin supplied me with kayak (Rockpool Menai 18) and logistical support. I imagine there are other places as good as East Greenland but I haven't found them yet.
I have visited West Greenland which doesn't offer the raw feel of the East. If you want adventure, go East! On my second expedition Martin guided a small team to Lake Fjord, which was where Gino Watkins died in 1932, a truly fascinating place. 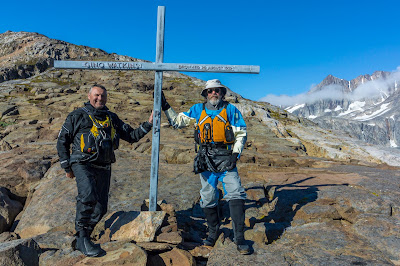 I have also paddled 300kms along the Antarctic Peninsula on a recent expedition camping on ice along the way. This expedition was inspired having read about John Rymill who was one of Gino Watkins expedition members in the 30's. https://en.wikipedia.org/wiki/John_Rymill
Certainly an excellent trip but for me East Greenland is better. Antarctica is unbelievably committing with kilometre after kilometre of ice cliffs, really unpredictable weather and very few sheltered campsites. Overall, a very dangerous place to paddle. Plus in no way could the accessible and regularly visited part of the Antarctic Peninsula be called wild and remote. It is normal to see cruise ships, zodiacs and yachts every day. Remember, 30,000 people a year visit Antarctica in a 3 month window. You don't have to go far in East Greenland to escape all of that. Antarctica lacks the unique, captivating culture and social history of the East Greenland Inuit. A friendly and charming race of people. It is also logistically far easier to get to East Greenland compared to going to Antarctica. And cheaper!
I will definitely be returning to East Greenland, and I will travel with Martin. 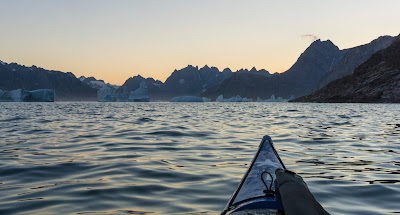